Tecoaque. One of the most interesting aspects is that according to sources, a Spanish caravan that was part of the expedition of Pánfilo de Narváez, who had the task of learning Hernán Cortés, was captured in this place. 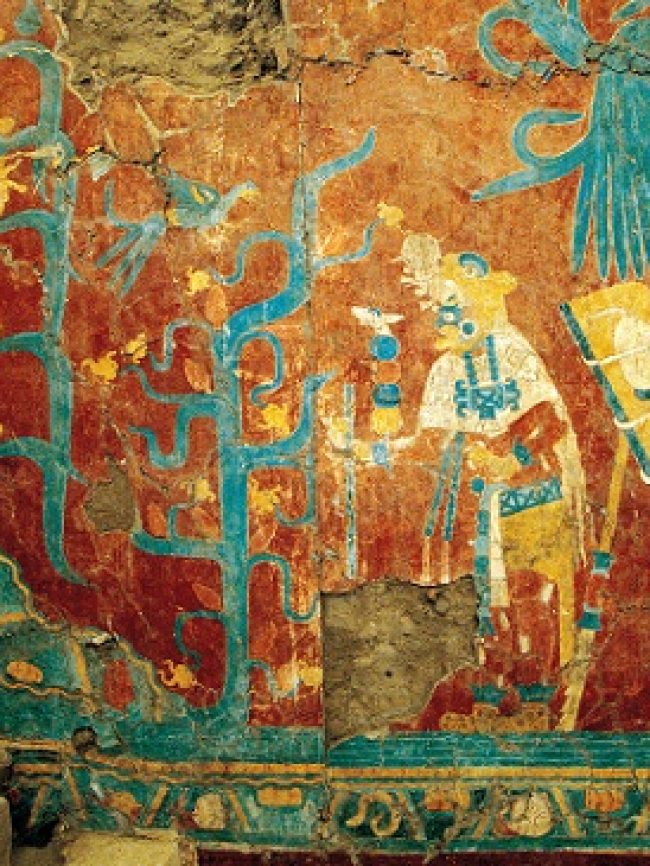 Cacaxtla. Located southwest of the state, 40 minutes from the city of Tlaxcala, is a set of murals considered the best preserved of the pre-Hispanic era among which stand out for its uniqueness and symbolism the “Bird Man” and the “Jaguar Man”. They belonged to the Olmec Xicalanca Culture and were discovered on September 13, 1975. They were painted between 750 and 800 A.D. It has a site museum where extraordinary pieces that were found in the place are exhibited. Xochitecatl. It is a group of monuments that has a singular importance for being one of the oldest settlements in the Tlaxcala, Puebla valley. The monuments and archaeological pieces from this site are an exemplary example of the cult to the mountains and fertility, very characteristic features of Mesoamerican religions. Xochitécatl was the most important ceremonial center of the population scattered throughout the valley and home to many generations of people for approximately nine centuries. Its beginnings date back to the Middle Preclassic of Mesoamerica. It was abandoned by its inhabitants in the first century of the Christian era, due to the eruption of the Popocatepetl volcano. Its name means “In the place of the sacred or divine wall”. Meet in this place the pre-Hispanic vestiges of Teotenango with an extension of 2 square kilometers, where you will find the Plaza del Jaguar. Located in the State of Mexico, this is one of the sites declared a World Heritage Site by UNESCO, the Archaeological Zone of Teotihuacán is the place where the imposing pyramids of the Sun and the Moon are located, connected by the Calzada de los Muertos. 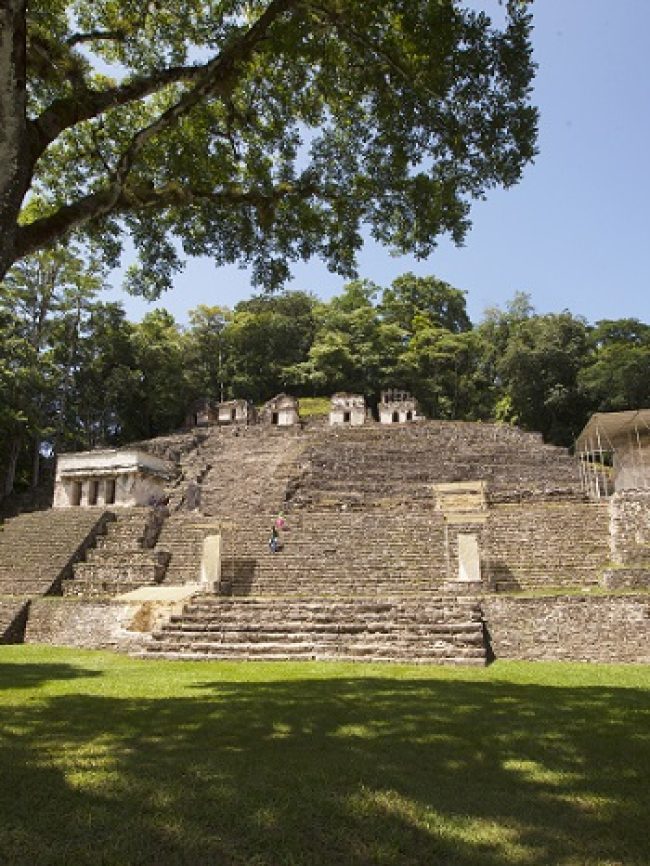 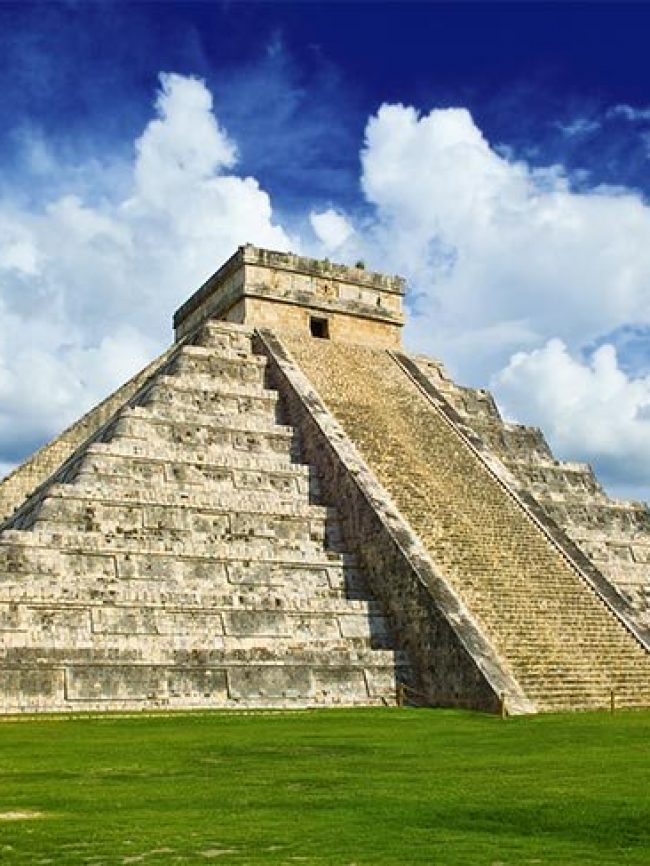 “The city on the edge of the well of the Itzáes” Located 115 km from the city of Mérida, recognized and declared by UNESCO as a World Heritage Site. Furthermore, its Kukulkán Castle was declared one of the seven wonders of the modern world. It was one of the largest and most powerful settlements in the central-northern part of the Yucatan peninsula. Chichén Itzá had an extension of approximately 25 km2. The religious and administrative centre covered 6 km2, at a short distance the elite lived in palace-like buildings, decorated and painted in bright colours. Around these, between 50,000 and 100,000 people lived in palm-roofed palapas. The Itzaes settled in Chichén Itzá in approximately the 9th century AD, gradually forging an extensive domain whose centre was Chichén Itzá. At the end of the 10th century, the city was invaded by the Toltecs; this invasion brought a series of new cultural elements, most notably the representation of the god Kukulkan. In approximately 1250 A.D., the inhabitants left the city for reasons that have not yet been clarified. The power that this city developed was so great and important that even after the time of its decline it continued to be a […] One of the most emblematic tourist attractions of Malinalco, known as the “Cerro de los Ídolos”. The only monolithic pyramid in America is located on this site and the initiation rituals of the eagle warriors were performed. 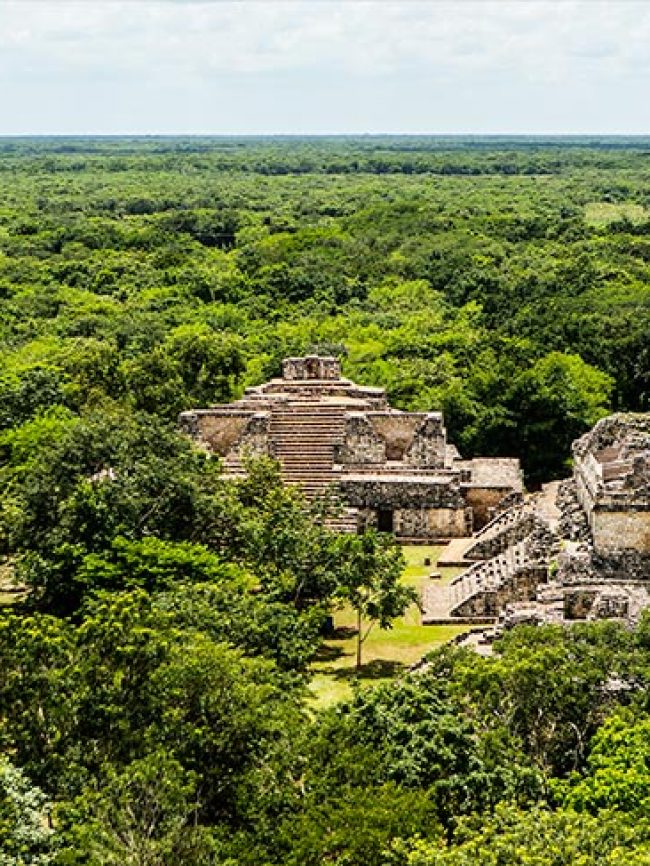 “Dark Jaguar” – “Lucero Jaguar” Located 190 km east of Mérida, Ek´Balam is a Mayan city that had its maximum development during the classical period. It was possibly the center of the “Tlalol” kingdom. Its foundation dates back to 300 B.C., until the arrival of the Spanish. It had an area of approximately 12 km2, which included a sacred space of just over 1 km2 where the elite resided, protected and bounded by 3 walls. The foundation of this city is attributed to a lord called Ek’ Balam or Coch Cal Balam, who arrived from the East and ruled for the first 40 years. It was the capital of the empire of Tah, to which the towns of the eastern part of the state paid tribute, including part of the coast, as evidenced by the shell offerings that have been found. It has 45 structures and is surrounded by two stone walls which had defensive purposes and for access control, and another one that joins the central buildings. Numerous vestiges have been found throughout this archaeological zone such as friezes, masks and statues with allusions to the jaguar and characters that were of great importance in the city, mainly effigies […] Located 85 kilometers from San Cristóbal de Las Casas, Toniná is a sacred space made up of an  artificial mountain with seven platforms 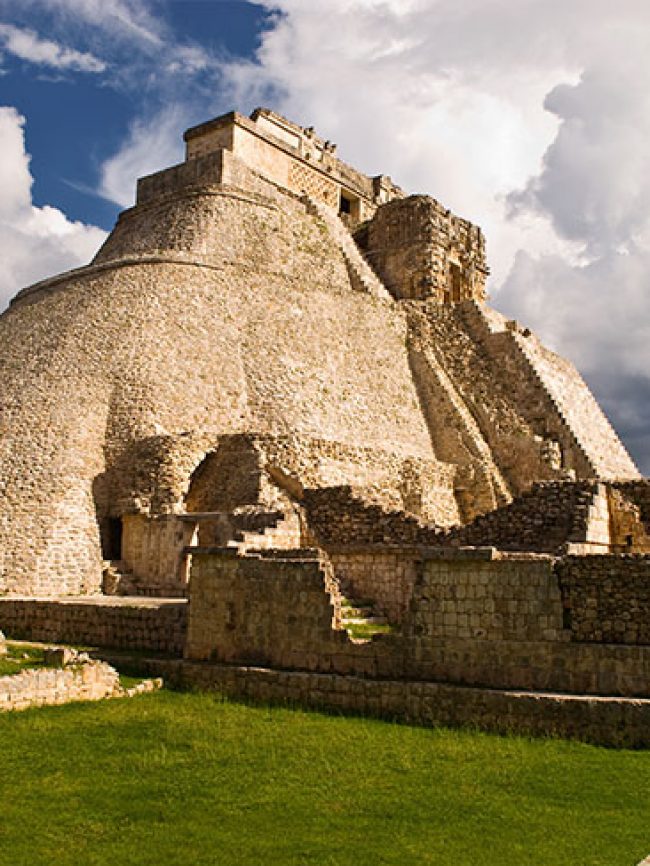 “The three times built” Located in the south of the state of Yucatán, 80 kilometers from the city of Mérida, it is one of the main archaeological sites in the Mayan world. Due to its importance, it was declared a World Heritage Site by UNESCO in 1996. The findings in this archaeological site indicates that this city was founded by the Xiues tribe, its occupation dates from the late classical period (600- 1000 AD) and had a population of approximately 20,000 inhabitants. The political and economic power was ruled by selected groups of people because they were considered intermediaries between men and the deities. Religion was a factor that allowed the leaders to monopolize the main activities. Uxmal gradually became one of the main regional capitals of the northern Maya. The livelihood of this city was maintained by the fertility of its soil for agricultural activities. They mainly worshipped deities of water, earth, the sun and Venus, which are present in the orientation and decoration of their structures. More than 160 chultunes or cisterns have been found to collect water from the rain, as this area did not have any cenotes (underwater rivers), and there was no other source of […] 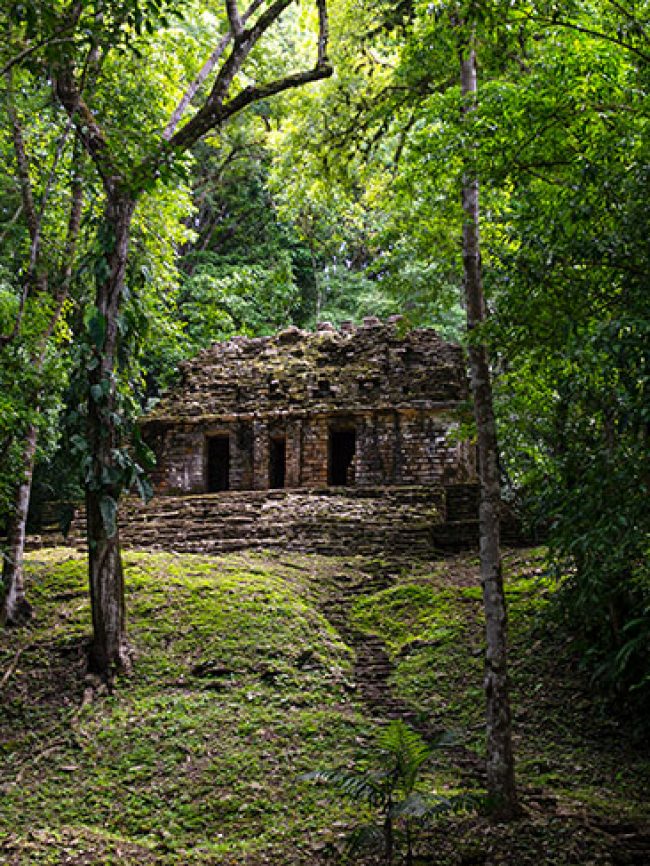 Yaxchilan is an ancient Mayan city located on the riverside of the Usumacinta river,  on the border of Chiapas with Guatemala. 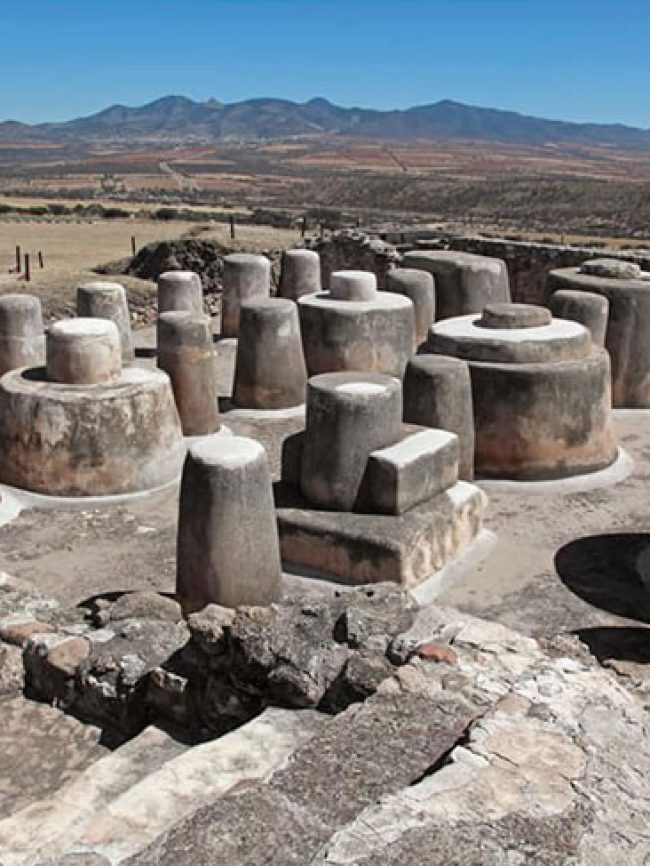 Millenary History – Chalchihuites Considered the northern border of Mesoamerica, this archeological zone’s culture developed one of the oldest representations of the National Emblem on record. Its name comes from its discovery on the grounds of an old ranch called Alta Vista or Buena Vista, very close to the mining town of Chalchihuites, that’s why its second name, whose last word is a word of Nahuatl origin meaning green stone. This pre-Hispanic city extended from the years 200 to 1100 of our era through the northwest of Zacatecas and south of Durango. Some astronomical studies indicate that this area’s location is associated with its proximity to the Tropic of Cancer. It has also been proven that the city is designed using a triangulation, as follows – The cumbre de Picacho Pelón 11 km to the east – The Cerro Chapin 7 km to the southwest – Colina del Pedregoso 5 km to the northeast This location allows them to observe the annual movement in the sun, and so they could anticipate the changes of seasons in the course of the agricultural cycle. At the top of Cerro Chapín, there are 2 “petroengraving” of circles-crosses with calendar beads very similar to […] 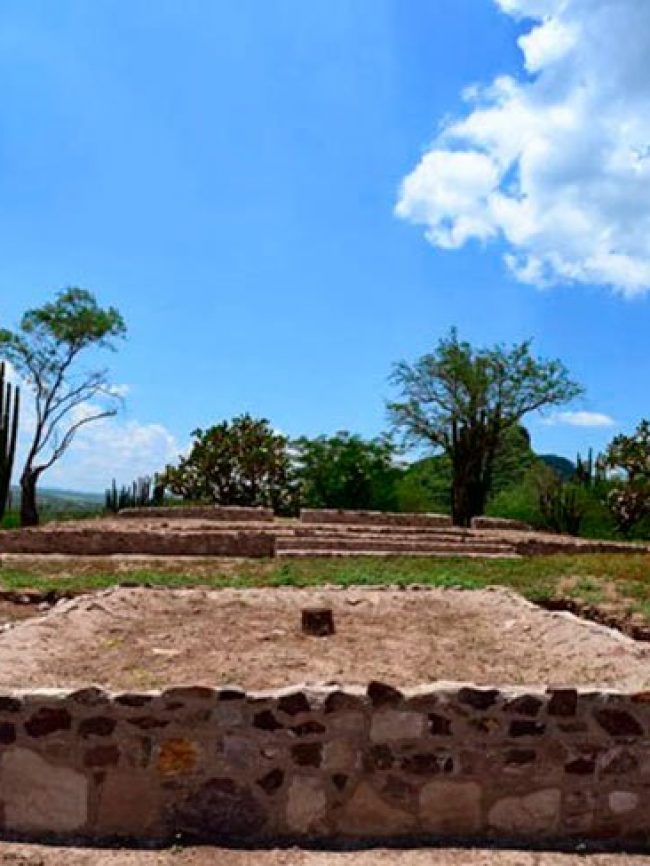 Juchipila  This is a civic-ceremonial center with residential architecture that was occupied by the Caxcanes. It is popular for the archaeological hiking experience it offers to the visitor. To the rhythm, you walk through pieces, platforms and more structures that will guide you through the vegetation until you reach the main building. It owes its name to the windows of the house Acantilado that is located at the top of the site. It is located in the town of El Remolino near the municipal seat of Juchipila, Zacatecas. The archaeological work that has been done has allowed to characterize the site as the largest cultural development of the Juchipila Canyon, some radiocarbon tests have given date ranges that suggest when the occupation began at the site. Nine platforms with similar structures have been detected with open spaces limited by walls and structures on their surface since a great amount of archaeological materials have been found and it was believed that civic-religious activities took place there.  The “Casa Acantilado” is the best known element of this area, this house is so far the most southern within the tradition of buildings of this type of construction, in fact, its system is similar […] 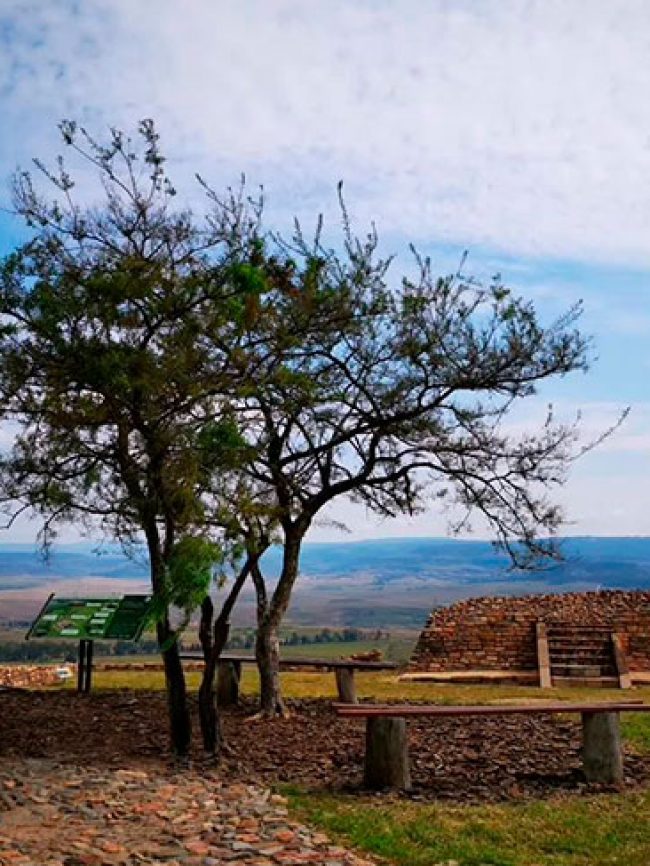 The Earliest Settlement In Zacatecas – Teúl de González Ortega  Cerro de Teúl was one of the main pre-Hispanic ceremonial centers in the South of Zacatecas and maintained an uninterrupted occupation for approximately 1,600 years. This site is distributed in the hill’s northeastern slope, where you will find the Main Square, the Sunken Patio, and the Game Court. Until not long ago, the Cerro del Teul located in the inhabitants was only one of the last bastions of the brave “caxcans” fighting against the Spanish invasion. This site had one of the first industrial areas in the continent where they produced copper and ceramic crafts; various archaeological types have been found, such as shell and greenstone beads and earrings with Teotihuacan motifs and polychrome codex style ceramics. With 150 hectares in which there is only one exploration in 5 to 6 hectares, it is open to the public since 2018. In all this time, 2 pyramids and a portion of a ball game have been discovered and several human burials that reveal changes in the funeral ceremonies. At the site, a life-size pre-Hispanic skeleton was found, which represents a decapitated ballplayer from the years 900 – 1100 A.D.; it is […] 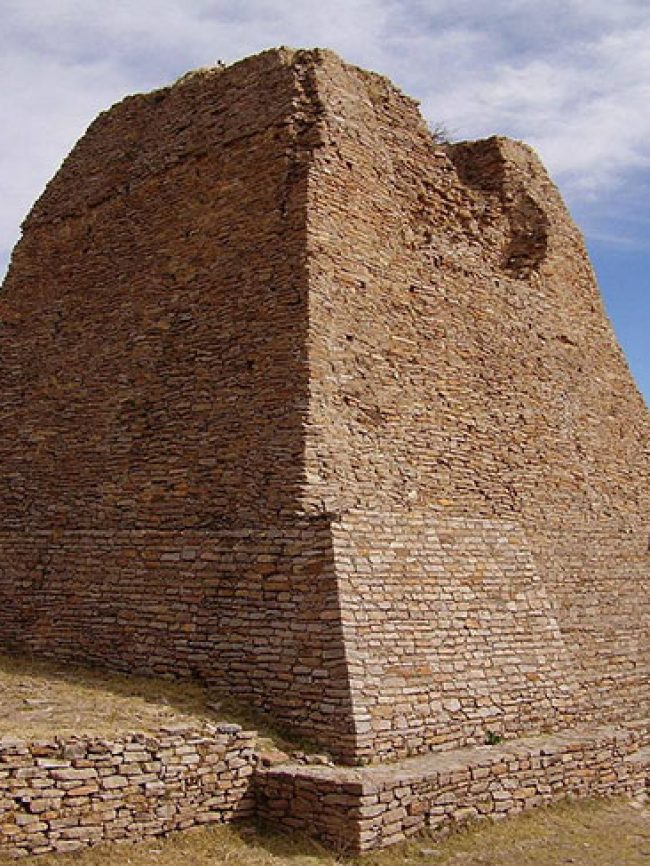 Monumental Settlement – Villanueva  This enormous settlement is the most relevant in north-central Mexico for its architecture. The name of the archeological zone refers to the burnt remains found in the place when extracting stone. The most impressive attractions are its ball game, a court in the traditional “I” shape and a pyramidal base, its votive pyramid, and the hall of columns, the largest roofed structure in all of Mesoamerica. There is also a network of pre-Hispanic roads that communicate with the smaller settlements around it, which manifest their power and control, circulating the taxes and resources that support the population. The ancient inhabitants settled in the Malpaso Valley; the pre-Hispanic occupation occurred between 350/400 to 1150 of our era. The archaeological zone is located 56 km south of the city of Zacatecas. This place is the headquarters of the “Arqueología Sideral” experience, a guided and theatrical night tour that will make you see the stars like never before, won the recognition of the readers of México Desconocido magazine; in 2020 as “The Best Experience in an Archaeological Zone.”